One of the widely used Forex indicators, introduced by Bill Williams, is called ‘Alligator’. When explaining peculiarities of application of this ‘beast’, its creator stated, that the transactions should be opened only when the Alligator opens its jaws. The reptile is hungry, which implies a beginning of a trend. When it satisfies its hunger, it closes the jaws, which serves as a signal for the trend ending and the position closing.

As to the trend, everything is clear here, but according to statistics, it only takes 20 - 25% from the total time, during the rest of time we see the flat trend in the market. So, should we stop working during this period of time? Certainly not!

During the flat trend the satisfied Alligator sleeps, and all its three moving averages are entwined (chart A on the fig.). As a rule, it’s easy to draw the lines of support and resistance in this area, identifying the boundaries of the sideways channel, in which the currency pair is moving (red lines on charts A and C).

In the example discussed, on the timeframe H4 the width of this channel makes around 200 points, which offers great opportunities for making profit.

(If you find it difficult to draw such a channel, you can use one of the indicators designed for this purpose). 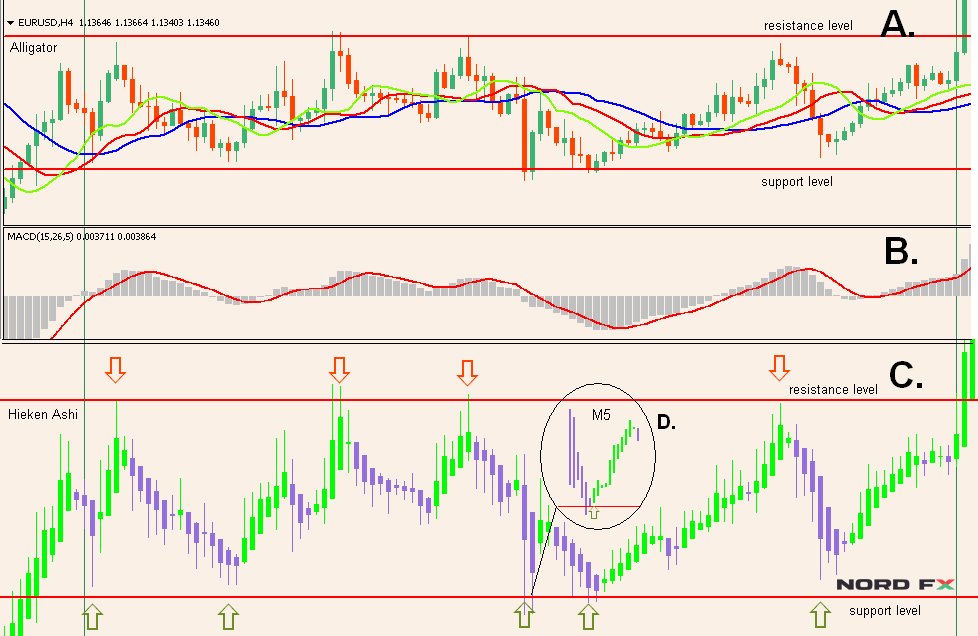 (Note: the concept of the support and resistance levels is quite conditional. It would be more appropriate to call them zones rather than levels, because their width (possible backlash) may reach up to 15-20 points).

To get a confirmation of price reversal, apart from the candlesticks, one of oscillators, for instance, MACD (chart B) can be used. However, during a flat trend the signals of oscillators can be implicit, and sometimes they can be even wrong. That’s why it’s preferable to have at least one more indicator available, for instance, Heiken Ashi (chart С), which is also integrated in the terminals МТ4 and МТ5. For the moment of opening a transaction to be determined with more precision, this indicator can be used not only on the timeframe being traded (in our case Н4), but also on a shorter one. The moment of the price rebound is shown on the fragment D.

« Trader s Guide to Markets
Receive
Training
New to the market? Make use of the “Getting Started” section. Start Training